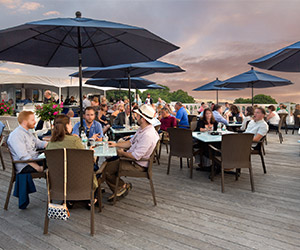 Everyone is familiar with the common denominators of the six New England states: rich in history and heritage and filled with outdoor experiences that shift as the seasons change. From traditions that date to the colonial era to modern new developments, groups will find comfort, adventure and excitement wherever they wander in the region.

The CTCSB was formed in 2012, uniting the Greater Hartford CVB and the state’s Department of Economic and Community Development. It is Connecticut’s first statewide marketing entity.

“The meetings market is improving and we’re seeing great interest,” Van Parys says. “We have been busy reintroducing Connecticut to decision makers, and the bureau has seen a fair amount of success.”

What sets Connecticut apart for groups is all of the unique, historical meeting venues, according to Parys.

“Being a small state, everything is so close that you can go from skiing on the mountains to swimming in Long Island Sound in under an hour,” he says.

Proximity cuts down on travel time and makes it easy for planners to integrate unique activities into busy itineraries. On the historical side, groups can tour the Mark Twain House & Museum in Hartford. Samuel Clemens and his wife designed the home from the ground up and lived there from 1874 to 1891.

Nowadays, the historic home is accompanied by a modern-day museum with numerous venue options. The Great Hall can host up to 100 for dinner, and a tech-equipped auditorium seats 175.

For an avant-garde event site, the Phillip Johnson Glass House in New Cannan is visually striking, with stark lines and glass walls. The former private home of the famous architect, the glass house is set on an inspiring 49-acre campus that showcases a scattering of beautiful buildings and modern landscape design. It hosts educational programs, musical events and literary retreats throughout the year and can be booked for corporate functions and receptions.PageBreak

Maine
Like other New England states, Maine offers top-notch skiing at resorts including Sugarloaf and Sunday River, which is currently undergoing a $5.7 milion upgrade, fantastic fall hiking along the Appalachian Trail and the “best white-water rafting in the Northeast” according to Carolann Ouellette, director of the Maine Office of Tourism, but the state’s “Big Three” remain moose, lighthouses and lobster.

“Those are the classics,” Ouellette says, recommending that visiting groups experience the state’s maritime heritage via lobster boat rides, boat-building demonstrations or Windjammer cruises along the coastline and neighboring islands.

After seafaring works up an appetite, there are many sustainable, local dining outlets to choose from, and in September and October, foliage and harvest festivals across the region make dining scenic as well as delicious.

“The farm to table movement is very much alive in Maine, and the fall is great time to eat out,” Ouellette says.

Massachusetts
Boston is in the midst of a hotel boom, with the Greater Boston CVB reporting that as many as 2,700 room units may come on-line over the next four years. The Seaport Square development is one of the growing hotbeds, covering 24 acres and home to four potential hotel projects, including the 120-room Marriott Residence Inn Seaport, plus more than 6 million square feet of retail, office and residential space and several new urban green spaces.

The Westin Boston Waterfront, headquarters hotel for the Boston Convention and Exhibition Center, is also considering a 320-room expansion.

The new continues to blend with the old, and Boston takes care to preserve its history. Even a simple inter-session stroll along the Harborwalk or through the Public Garden can be illuminating, and the revamped Boston Tea Party Ships and Museum opened last summer, offering an educational escape for attendees.

Boston may be the gateway to New England, but attendees can stand at the center of the world inside the Mapparium, a three-story stained-glass globe at The Mary Baker Eddy Library for the Betterment of Humanity. Inside, guests can walk across a 30-foot bridge and gaze at the colorful map of the world, circa 1935.

To the west, Springfield and the 8,000-seat MassMutual Center welcome large conventions in Pioneer Valley.

For a quieter retreat, the Porches Inn is a quintessential Berkshires property affiliated with the Massachusets Museum of Contemporary Art, with 47 guest rooms, an inviting porch and charming vintage artwork.PageBreak

New Hampshire
“There are many reasons why groups come to New Hampshire,” says Tai Freligh, communications manager for the New Hampshire Division of Travel and Tourism Development. “They come for the value, the variety of excursions, the tax-free shopping and the waterfalls.”

This well-rounded state has numerous attractions, but the coastline can steal the show. To take advantage of the views, book an event the Seashell Oceanfront Pavilion in Hampton Beach State Park. Overlooking the Atlantic Ocean, the venue was recently demolished and rebuilt with additional meeting and event space.

“The beach is recognized as one of the cleanest in the country,” says Freligh, and the park hosts concerts, fireworks and large-scale picnics.

In the fall, the bucolic image of winding country roads lined with quaint inns and trees bursting with autumn colors come to life in New Hampshire.

Rhode Island
Sometimes overlooked in favor of the neighboring big cities, Rhode Island can hold its own in terms of cultural cache and elegant venues.

In Newport, the 40-acre Castle Hill Resort unveiled its upgraded outdoor dining space, the Lawn at Castle Hill, which doubles as an event venue and is complemented by the resort’s yachting and clambake options.

A 92-room Homewood Suites by Hilton opened in Middletown with 950 square feet of meeting space.

In Rhode Island’s capital city, the Providence Performing Arts Center is hosting premieres for a number of Broadway show tours this year, from Book of Mormon to Flashdance, and space can be reserved for receptions on the stairs of the grand lobby, cocktails in the President’s Club before a show, or private performances in the main auditorium.

Brian Hodge, communications manager for the Providence Warwick CVB, says in addition to the now famous WaterFire outdoor show, the recently renovated Providence Public Library is a “jaw-dropping” meeting venue, and bibliophiles will also love a visit to the Providence Anatheum Library, which dates back to 1753.

Vermont
In the Green Mountain State, ski culture is practically synonymous with regular culture. Tucked beneath Canada and east of New York, Vermont is rugged and adventurous, both on the slopes and off.

Near the country’s northern border, Jay Peak Resort embodies the hearty winter enthusiasm that visitors find here. The property is remote, but it’s not a drawback.

“We’re off the beaten path, but once groups get here we have everything they need,” says Erica Wilson, the resort’s conference sales manager.

Once a semi-secret local ski spot, the resort continues to grow and expand its four-season offerings.

A new hotel and 8,000-square-foot conference center both opened in early 2012 and have helped to “bring the resort alive when it’s not snowing,” Wilson says.

There are four full-service restaurants, families love the 50,000-square-foot indoor waterpark, and an adventure center is under construction.

When the snow melts, groups can spend an afternoon on a Vermont-style Segway tour. But at Smugglers’ Notch Resort outside Burlington, it is not your average touristy outing that winds through downtown in the shadow of skyscrapers. This epic Segway ride takes participates along scenic forest trails.

About the author
Kelsey Farabee
Read more articles from this author