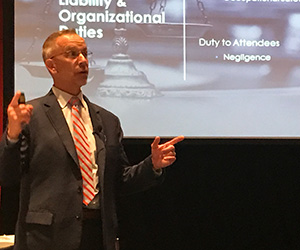 These are the sobering statistics for multiple casualty events in the U.S. between 2000 and 2017, occurring at schools, workplaces, medical institutions, houses of worship and most certainly events, among other locations, according to data presented during the “A First Responders Guide to Handling Active Shooter and Terrorism Threats” educational session at ASAE’s Annual Meeting & Exposition.

ASAE’s 2018 Annual Meeting & Exposition was underway in Chicago, August 17-21, 2018, at the time of publication. The session on active shooter and terrorism threats was held on August 19.

One eye-opening takeaway from the session was this: if you think you’ve protected your organization by having event insurance that covers terrorism attacks, think again—the last event that was considered a terrorist attack by the federal government was 9/11. When it comes to insurance, those labels matter.

Session panelists included attorney Scott Moore, principal advisor for EMS Resource Advisors Inc.; Jamie Pianka, COO of the Professional Ambulance Service (Pro EMS), Center for MEDICS & METI project, and who worked EMT operations at the 2013 Boston Marathon bombing; and Glen Simpson, director of special operations for Community Ambulance, and who was on-site at the October 2017 Route 91 Harvest festival mass shooting in Las Vegas in which 58 were killed and more than 500 were injured.

Las Vegas, in particular, is well prepared to handle active shooter or terrorism incidents, according to Simpson, who was on-site and rushed in to help victims during the Route 91 Harvest festival mass shooting in which shots were fired from a guest room at Mandalay Bay Resort & Casino.

“When you plan events in Las Vegas you spend a lot of time talking about the ‘what ifs’: bombs, active shooters,” Simpson told the audience. “I spent time with MGM, talked to everyone in the room about what we would do if there was an active shooter. Little did we know that four days later someone would be perched in Mandalay Bay shooting at the spectators.”

Simpson said that 16 staffers were dedicated to event security, liaising with representatives of Las Vegas’ police and fire departments, among other local civic organizations, adding that in hindsight even more organizations should have been involved.

“We need to get more people involved in these talks, such as rideshare companies, who ended up taking a lot of the people away,” Simpson said. “At that venue there was no spot for cabs or Ubers to pull up.”

Simpson provided the following details about his involvement in helping victims on-site at the Route 91 Harvest festival and how the shooting unfolded.

The action began in a routine fashion, with Simpson called to escort an inebriated concert-goer out of the festival, with the woman deciding to leave the event and take transportation back to her hotel.

“The moment we sent her away we heard those first two shots,” Simpson remembered. “These were test shots…to ensure his weapons were ready to go. Then the first volley [occurred], about 100 rounds.”

“At that moment I had two decisions to make … retreat from the venue or run back in,” he said. “I had personnel in the facility .... I decided to run back into that venue.

“What you should take home today is the importance of pre-planning,” Simpson added. “I’ve been through numerous scenarios to try to figure out how we would deal with these situations, but I never realized it would be somebody shooting from above, and I never realized about how my instinct would kick in.”

Some key points to consider are the following:

Simpson added that he is starting to see Stop the Bleed materials included in facility AED stations.

Following are some critical strategies to adopt to keep you and your attendees safe in case your meeting or event—or place of work or other venue—comes under attack.

During an active shooter incident there are three strategies to keep top of mind: Run, hide and fight:

After the incident has been resolved, keep in mind the following advice: