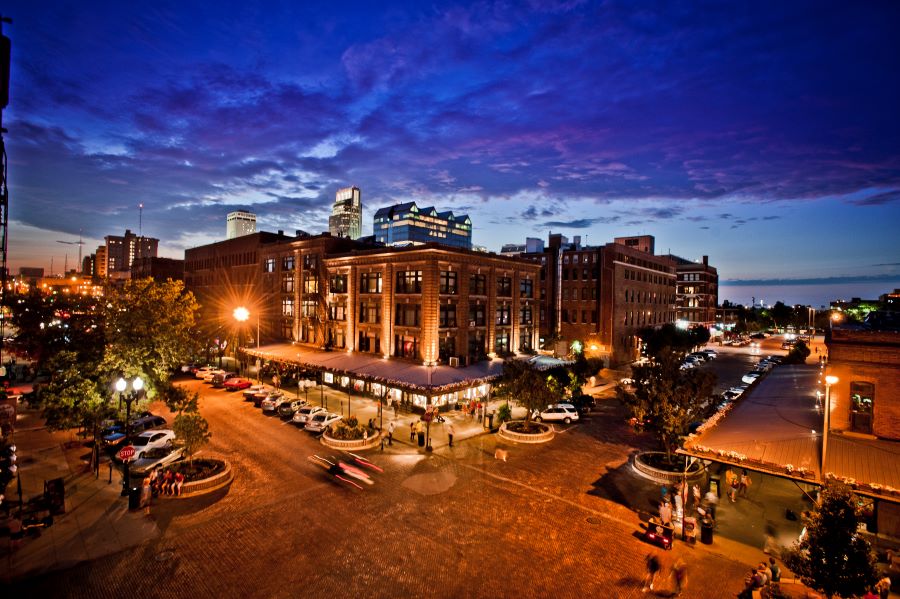 The home of high-profile philanthropists such as Berkshire Hathaway’s Warren Buffet, Omaha is blessed with civic-minded moguls who frequently pitch in for the good of the community.

According to Mattie Scheeter, director of sales for Visit Omaha, there has been nearly $8 billion in public and private money spent on projects impacting Omaha’s downtown convention district, riverfront and other areas.

“It’s not all in the heart of downtown, which is cool to see,” she said.

Scheeter said one particularly exciting project is the $300 million Riverfront Revitalization Project near the city’s convention center and which will transform Gene Leahy Mall, Heartland of America Park and Lewis & Clark Landing. Major features include a performance pavilion, sculpture garden, boardwalk, urban beach and the Luminarium center, which will boast riverfront views.

“Gene Leahy Mall was sort of a river that led to nowhere,” Scheeter said. “They revitalized that whole area, took it up to street level and did redevelopment, and it’s mostly privately funded—maybe 80%. It’s the community leaders coming together in an effort to connect all of these parks because they saw a need for it.”
Scheeter said the first phase of the Gene Leahy Mall development will be where most of the rentable space for events will be, including a performance pavilion set to open this summer. Other rentable areas will include 40,000 square feet of lawn space.

Heartland of America Park will feature an ice-skating ribbon that resembles a snowman and allow people to continually skate between each of three rinks. Another sure to be popular feature will be bocce ball courts.

The project is expected to wrap in 2023 and also include the refurbishment of the Lewis & Clark Landing historic park, which will boast an urban beach, sand volleyball courts, pickleball courts and an event plaza with carnival rides.

Other Omaha development highlights include the following:

Besides the new Marriott and existing Hilton Omaha, which offers 600 rooms and is attached to the convention center, the city also benefited from a mini boom in boutique hotels during the pandemic, including the following:

Lincoln Moves Ahead on CC

Located an hour southwest of Omaha, the state capital of Lincoln has embarked on a mission to develop a new convention center.

“Much like Pinnacle Bank Arena and the adjacent entertainment district, a convention center would become yet another transformative destination development for our community and downtown,” said Jeff Maul, executive director of the Lincoln CVB, in a statement announcing the feasibility study. “It would enhance the tourism landscape and help shape the future of tourism in Lincoln for years to come, continuing the ongoing momentum of Lincoln as one of the Midwest’s most beloved destinations.”

Besides its stature of being named the official starting point of the transcontinental railroad by Abraham Lincoln, Council Bluffs is perhaps best known as a regional gaming center, with a Harrah’s Council Bluffs Hotel and Casino (251 guest rooms; 2,600 square feet of meeting space, with the adjacent 4,000-capacity Stir Cove Concert amphitheater) and Ameristar Casino and Hotel (160 guest rooms; 6,600 square feet of meeting space) being major draws.

Other interesting Council Bluffs area options include Hitchcock Nature Center and The Palace Events Center, both of which showcase the region’s natural lands and open spaces.

“Individuals can bring in whatever food they like, and we also have an alcohol license for guests to bring in their own beer and wine, although this does not cover liquor, which is not allowed,” said Kylie Gumpert, promotions and outreach coordinator for Pottawattamie Conservation, which promotes appreciation for Pottawattamie County natural areas and operates both venues. “We often have groups rent both rooms and use them for breakout spaces, and we are currently working on developing an outdoor pavilion for rentals and events as well, working with a company called WholeTrees to feature some of the park’s oak trees.”

Facilities for events such as conferences, strategy meetings, networking, retreats and dinners and picnics include the following: