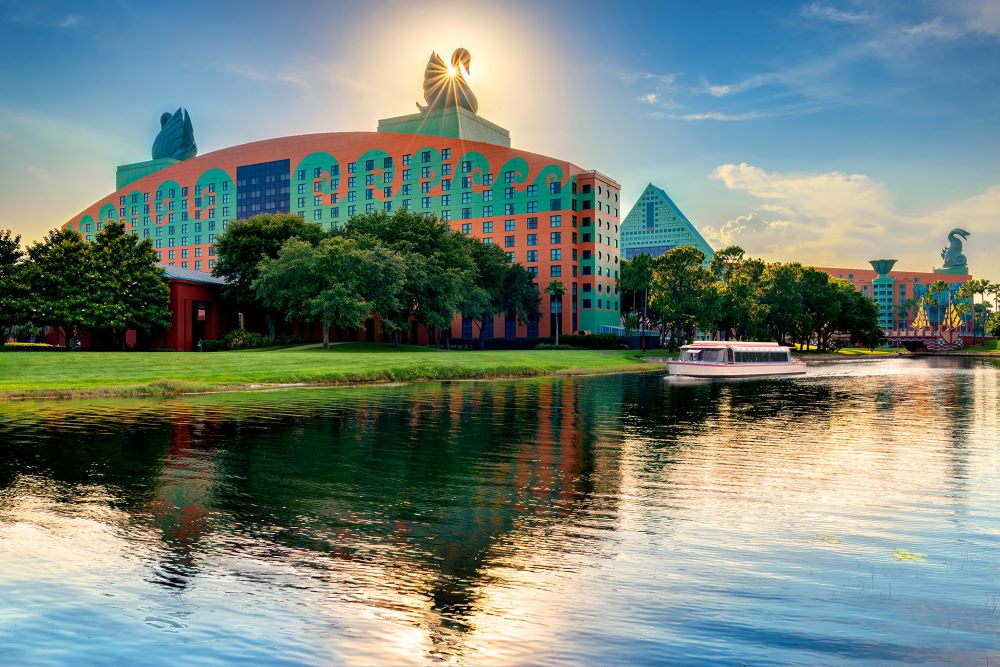 Whether you’re planning a small meeting at the Walt Disney Swan Reserve, a medium size group at the Swan, a large meeting at the Dolphin, or a mega event using the entire three-resort complex, these remarkably diverse hotels have all the facilities you’ll ever need—and then some—to meet your group’s every wish.

Built under the direction of Michael Graves, the legendary American architect, the Walt Disney World Swan and Dolphin Resort’s iconic dolphin and swan statues can be seen from miles away. The two adjoining resorts, with their abundance of flexible meeting space, surprisingly large guest rooms, and top-notch restaurants, have fast become a nationally recognized brand and prestigious leader in convention properties.

With its boutique style design, the Swan Reserve features 349 expansive guest rooms, including 151 suites that increased the three-hotel complex’s capacity to a total of 2,619 guest rooms, with over 348,000 square feet of versatile meeting space. Of the Swan Reserve suites, 149 function as meeting suites built to accommodate private breakout meetings of two to 20 and offer the latest in technology. The Swan Reserve also introduced The Vue Ballroom and The Vue Terrace which sit atop the 14-story hotel, offering groups one-of-a-kind spectacular views of the Walt Disney World theme parks and nightly fireworks.

An award-winning banquet, catering and culinary team provides ongoing support throughout your program, whether it is a formal, black-tie dinner in the ballroom, a picnic and volleyball game on the beach, or an a la carte dining experience in one of the Swan and Dolphin’s world class signature restaurants.

Groups also enjoy full access to every available amenity on property, including the Balinese inspired Mandara Spa, preferred tee times on nearby Disney championship golf courses, a dip in one (or all!) of the six luxurious pools, and 22 world-class restaurants and lounges. Attendees will face the difficult dining choice between famed Todd English’s bluezoo, Il Mulino New York Trattoria, and Shula’s Steak House. Guests will surely want to book a table at Amare, the less formal yet upscale Mediterranean restaurant at the new Walt Disney World Swan Reserve.

Connected to Disney’s Hollywood Studios and EPCOT via waterway and walkway, and just minutes from Magic Kingdom Park, Disney’s Animal Kingdom Theme Park and Disney Springs, these three exclusive properties also deliver an ideal location for your next meeting and your guests will appreciate complimentary transportation to all Walt Disney World theme parks and attractions, with extended park hour benefits available before park opening daily and on specific evenings in select theme parks.

Meeting professionals can also take advantage of Triple the Points, Triple the Options for any group event contracted by September 30, 2022, for arrival through December 31, 2023, offering triple Marriott Bonvoy points on eligible meetings.

Get more information, or book your next meeting visit