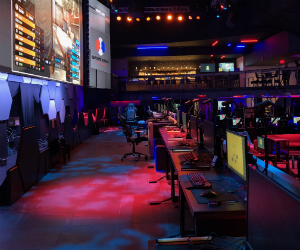 Video gaming continues to be all the rage, and planners and suppliers got in on the action during the closing night event of Meetings Today LIVE! West as the first group to be hosted at Esports Arena Las Vegas at the Luxor Hotel & Casino.

The 30,000-square-foot arena, which opened March 22, 2018, as the first dedicated esports venue on the Strip, mixes live and streaming esport experiences, including daily gaming, high-stakes tournaments and interactive entertainment, and offers private event spaces and buyout opportunities for groups.

The venue’s Main Hall features the primary competition stage, gaming stations, a two-story video wall, upper- and lower-level VIP rooms and two bars, while the Dome houses an interactive history of gaming display, a 360-degree videoboard and a gaming-inspired chandelier.

“We can provide things like tournaments and teambuilding experiences in the main hall and in our VIP rooms, where we can set up gaming pods with food service and bottle service,” said Monique Schwartz, assistant operations manager of the venue.

Our group split up in teams to play “Keep Talking, No One Explodes,” in which we had to work together to defuse a virtual “bomb” before it detonated.

Gaming-inspired food and beverage at the venue is spearheaded by celebrity chef Jose Andres and ThinkFoodEntertainment. Our group enjoyed a delicious poke station and Asian-infused appetizers.

[Partner Content: A Closer Look at the Design of Luxor's Esports Arena]

Meanwhile, cuisine of a different kind was the highlight of our last afternoon event for Meetings Today LIVE! West, with a three-hour program by Lip Smacking Foodie Tours.

Donald Contursi, president of the company, escorted us on a deliciously adventurous walking tour of four top restaurants on the Strip, weaving in stories about interesting art installations along the way.

At The Cosmopolitan, we tasted the fantastic Mediterranean-inspired fare at Estiatorio Milos, which flies in fish daily from places such as Greece and Portugal and is renowned for its organic tomatoes from California.

Lip Smacking Foodie Tours offers a variety of culinary programs, including a walking tour of downtown Las Vegas restaurants as well. The company can host groups of up to roughly 150 people.

Another culinary highlight of our agenda was dinner at the famous Beijing-inspired Mr. Chow at Caesars Palace.

Following a reception at the bar, complete with craft cocktails such as a lychee martini, we were treated to dinner in the elegant dining room, with its dramatic kinetic sculpture suspended on the ceiling.

The high point of the evening was a chef demonstration of hand-pulled noodles, followed by a decadent family-style meal featuring Mr. Chow's signature dishes.

Meetings Today LIVE! West, hosted at the brand-new Park MGM, formerly the Monte Carlo, attracted roughly 70 planners and suppliers for three days of networking, one-on-one appointments, an educational session on ways to better engage attendees by KiKi L’Italien of Amplified Growth, and off-site events spotlighting the best of Las Vegas for groups. Play With a Purpose was present to provide teambuilding openers such as a fun percussion play-along, while Clean the World set up a CSR station where attendes could build hygiene kits.

“It’s so great to have another Meetings Today! LIVE event in the books,” said Jim Krotz, executive director of Meetings Today. “It was one of our best and most exciting [events] yet, and it was great to see event planners connect with each other, properties for their future events and other suppliers.”

Check out our other 2018 Meetings Today LIVE! events here.