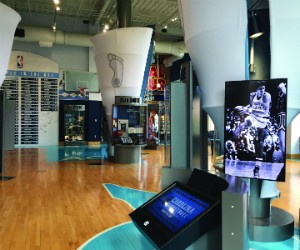 "Talent wins games,” once said all-time basketball great Michael Jordan, whose three seasons at the University of North Carolina included making the winning jump shot as a freshman in the 1982 national championship game, “but teamwork and intelligence wins championships.”

Through its Sports Event Recruitment program, the agency teams up with partners such as the North Carolina Sports Association, a statewide collaboration of sports commissions and authorities, CVBs and park and recreation entities, to attract athletic business.

Add first-class sporting venues and facilities, and year-round professional, collegiate and amateur events, and the Triangle is the ready teammate for group wins.

Local community support is always a reliable measure of a competitive sports market.

“Whether playing themselves, attending games, supporting their team or watching at home, folks around here are downright passionate about sports, proving time and again that the Raleigh area is one of the country’s most sports-friendly regions,” said GRSA Executive Director Scott Dupree. “Our wealth of superb venues enables this region to host a variety of sporting events that provide a significant boost to the local economy, with our numerous community partners working together year-round to ensure that each event is truly a memorable experience.”

Home of the NHL’s Carolina Hurricanes and NC State University men’s basketball, 19,500-seat PNC Arena hosts 150-plus sporting events, concerts and other programs each year. Flexible rentals include the full arena for conventions and club space for private functions. Upgrades including 3-D projection onto the arena floor and new upper bowl seating are slated for completion by fall 2018.

The field has also hosted the U.S. Men’s and Women’s National Soccer teams, including the latter’s qualifiers for the 2019 World Cup. Also staging national and regional college championships, the 150-acre park is encircled by an event-capable cross-country course.

Cary is also home to the National Training Complex for USA Baseball (amateur baseball’s national governing body, headquartered in Durham), where groups can catch the action at the MLB-regulation main stadium.

Offering challenging NCAA championship-level golf, the public Lonnie Poole Golf Course and its clubhouse can be rented for corporate and charity events.

Time, like a fastball, can zip right by. But major happenings can have lasting impact, such as the 1988 Kevin Costner-Susan Sarandon hit Bull Durham.

Credited as a catalyst for baseball by raising awareness of now familiar staples such as promo nights, unique team names and branded merchandise, the movie’s 30th anniversary was celebrated over two June 2018 weekends. The festivities, which included a screening of the movie and Durham Bulls baseball with the team in throwback uniforms, was held at Durham Athletic Park, where the movie was filmed.

As Ashleigh Bachert, executive director of the Durham Sports Commission, explained, this lively city is always switched on for sports.

“Proud home of Duke University, North Carolina Central University (NCCU) and the Durham Bulls, Durham is truly a destination for champions,” Bachert said. “From basketball and baseball to eSports and curling, ‘The Bull City’ offers opportunities to compete and participate in many different sports. Our affordable, available and accessible venues attract event owners of all types.

“For groups, Durham is a premier destination to stay and play, with plenty of hotel, food and entertainment options within a compact radius,” she added.

Opened in 1926 as El Toro Park, Durham Athletic Park was the Durham Bulls’ home until 1995, when the team moved to nearby Durham Bulls Athletic Park. Close to the Central Park dining and entertainment district, the event-capable historic site today is home of NCCU baseball.

Featuring Durham Bulls baseball from April through September, the new Bulls Athletic Park is ideal for group outings. Rentals include the popular picnic and party decks; luxury suites for 20 to 30 guests; and PNC Triangle Club.

Duke University venues include the Duke Basketball Museum and Sports Hall of Fame, with reception space for 270. Overlooking 40,000-plus seat Wallace Wade Stadium, Blue Devil Tower flexibly hosts receptions and banquets for up to 600 guests. Groups can combine conferencing with championship golf at the celebrated Washington Duke Inn & Golf Club.

At the 14,500-square-foot Triangle Curling Club, instructor-led groups can experience the unique ice sport of curling from September to April.

With 27 varsity men’s and women’s teams, the school’s year-round sports calendar is loaded with game-day options for groups. Major venues include 62,562-capacity Kenan Memorial Stadium (football) and 5,000-capacity Boshamer Stadium (baseball). Soccer is played at Fetzer Field; the women’s team reigns supreme with 22 national championships. Construction is underway on a brand-new soccer and lacrosse field at the Fetzer site.

Another shrine is the 21,750-seat Dean E. Smith Center, or “Dean Dome,” home of Carolina hoops and the nation’s fourth-largest college basketball arena. The men’s team has won six national championships, the first in 1957 and the latest in 2017. The adjacent free-admission Carolina Basketball Museum, fully renovated in 2017, is filled with artifacts covering the storied program’s history. The Secret About Alabama as a Meetings Destination Is Getting Out 3 Ways to Incorporate Local Culture Into Your Puerto Rico Meetings