You Don’t Need Interpreters at Meetings Anymore—This A.I. Language App Translates for You 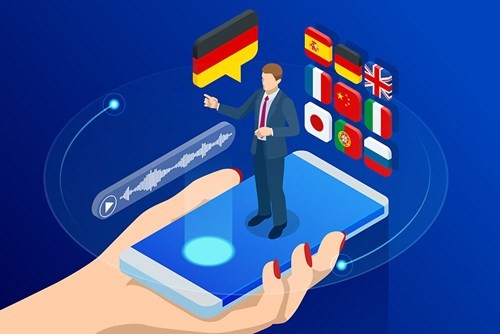 A new artificial intelligence app promises to provide instantaneous translation for 15 languages without an interpreter.

Silicon Valley-based startup Wordly may have cracked the code on providing what amounts to the Rosetta Stone of equipment-free translation services for meetings.

With this app, meeting and event planners and organizers wouldn’t need to hire a crew of human translators or pay for translation booth and equipment rental.

“Wordly provides a way for people to communicate without language barriers, especially for meetings and conferences,” said Lakshman Rathnam, CEO and founder of the company.

"This makes it very easy for meeting planners, so they do not have to organize human interpreters, provide sound booths or custom headsets," Rathnam explained.

Instead of using the services of one or more translators and renting equipment such as a wireless translation device, users can utilize a mobile device such as a tablet or smartphone.

The Wordly software is compatible with a variety of mobile devices.

“The attendees can actually just pull up their mobile devices or their computers and see the conversation in their language of choice on their screen or hear the translation using their own headset,” Rathnam said.

Wordly COO Kirk Hendrickson said the software can tackle a wide variety of languages spoken by the majority of meeting attendees, whether within or outside of North America.

A Translation Solution for Meetings and Events

“One of the challenges we often face in the meetings industry is that we want to bring in global participants but we’re limited not only in being able to have interpreters at all, but how many interpreters we can bring in, how many we have space for in the booth," Hendrickson said.

"And can we have a budget for all the booths and headsets for each individual interpreter?” he added.

“With Wordly you’re able to do this all with one app from an individual’s phone where they’re able to just hold it in their hand, listen with their own headset and have it in 15 different languages,” Hendrickson concluded.

He also clarified that Wordly is different from consumer translation services such as Google Translate in that instead of a one-to-one serial conversion experience it supports continuous conversations from one speaker to many listeners in many languages simultaneously.

This is a prerequisite for meetings and events that separates Wordly from the competition.

Interestingly, I discovered Wordly by a random face-to-face meeting.

During celebrations for Global Meetings Industry Day on April 4, 2019, at San Francisco’s Hilton Union Square, I was holding fort at a cocktail table when a man I never met approached me with cellphone extended in hand.

Rathnam, who was accompanied by Hendrickson, asked if I wanted to see a quick demo of their amazing new app that instantaneously translated between a variety of languages. Not wanting to seem rude and shoe them away, I thought, “What the heck, let’s see what they got.” 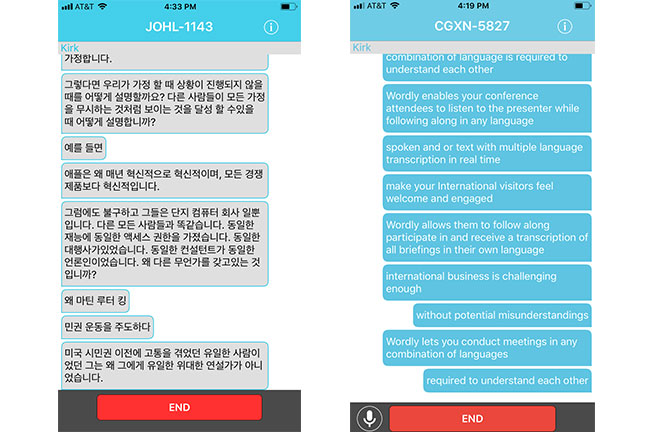 Wordly Translation Demonstration: Before and After Real-Time Language Translation

Challenging me to pick a language, any language, I decided to see if I could throw them for a loop by selecting Arabic. Rathnam then gave me a demonstration code to use Wordly on my own cellphone and we were off to the races.

Wordly seemed to flawlessly translate Rathnam’s English into Arabic nearly instantaneously on my iPhone, even through the din of a noisy social event.

Was it an accurate translation? I’ll never know because I don’t speak Arabic, but his point was made and I walked away impressed, ready to set up another face-to-face meeting.

I met Rathnam and Hendrickson for the second time at the Wordly headquarters in Los Altos, California, where I got the full demonstration and had a chance to interview both innovators.

Hendrickson said Early Access registration is currently available on the Wordly website and he noted that customers are already using the software for meetings and conferences.

General availability is expected in the third quarter of 2019.

Check out Wordly in action in the video below.

Read this next: How to Plan Accessible Meetings and Events: A Comprehensive Guide for Event Professionals 5 Ways to Deliver on DEI at Your Next Meeting Megan Henshall on Designing Inclusive Events and Attracting the Next Generation