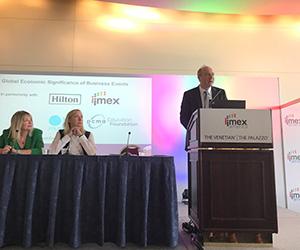 The global meetings and conventions industry is a $1.03 trillion business annually, according to the preliminary results of a survey conducted by Oxford Economics for the Events Industry Council (EIC). The full report will be released November 9, 2018.

“There was over $1 trillion in direct spending on business events with 1.4 billion participants across 180 countries,” said Aaron Allen, with economic forecasting company Oxford Economics, about the Global Economic Significance of Business Events study commissioned by the EIC.

The study defined a business meeting event as a gathering of four or more participants in a four-hour window in a contracted venue. EIC held a press briefing at IMEX America in Las Vegas to reveal the initial results.

Following are highlights of the preliminary findings of the EIC-commissioned study:

Following is a breakdown of business event direct spending and number of attendees, by region:

Full results are scheduled to be released by the EIC in November 9, 2018, and will include statistics about the number of jobs associated with the global business events industry in the top 50 countries.