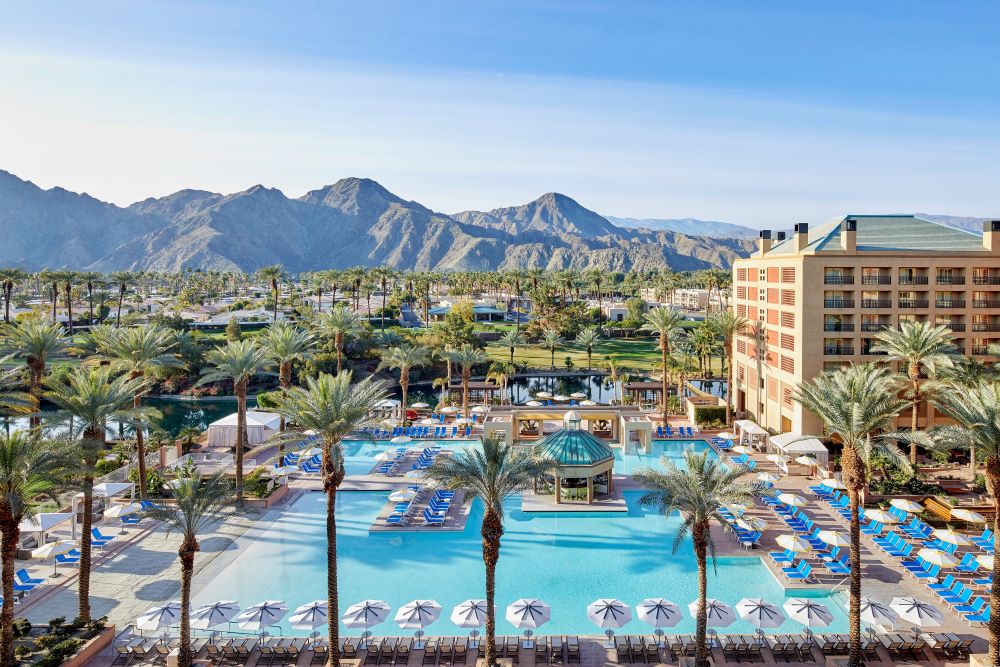 While California took the safe and steady road during the pandemic, its hotel stock was busy with renovations, such as in the Greater Palm Springs area, where the desert bloomed with improvement to many of its major meetings properties as well as infrastructure throughout the Coachella Valley.

Following are standout renovation and rebrand projects completed either during the pandemic, or in one case, right before, at six of the destination’s major resorts that cater to the meetings and conventions segment.

The Desert Springs JW wrapped a multimillion-dollar renovation in November 2021 that had a mission of transforming the property into a holistic retreat informed by desert elements. Marriott said the renovation’s goal was to emphasize wellbeing, with calming colors, silhouette murals, quartz vanities in the bathrooms and the addition of free-standing soaking tubs in more than 300 of the rooms.

All of the resort’s 884 guest rooms, including 101 suites, were redone, along with its lobby and a new ballroom named after a legend who loomed large over the Palm Springs area in both of their heydays.

The Sinatra Ballroom is a major highlight of the project, which at 25,000 square feet, is the largest in the Greater Palm Springs area. Named after OI’ Blue Eyes himself—and in honor of the legend’s last public performance at the venue—the redesign of the conference center features mid-century modern styling, with cool-blue hues, modern chandeliers and a sophisticated desert color palette.

The renovation also featured the debut of the JW Entertainment Zone, which offers an arcade game room, skee-ball, duck bowling, virtual reality games and other activities depending on the season. According to Marriott, future plans at the resort call for a spa redesign and updates to its dining outlets.

[Related: The Latest News and Tips for Meetings in California]

Formerly The Riviera, the 398-room Margaritaville Resort Palm Springs opened in fall 2020 and represents the casual-luxe brand’s first foray on the West Coast.

Indian Wells’ Miramonte Resort & Spa wrapped a $9 million renovation in late March 2022, transforming the resort’s 11 acres to resemble a Mediterranean retreat and redesigning many of its 215 guest rooms, with the complement scheduled to be completed by fall 2022. The project also renovated outdoor gathering spaces, including the restaurant and bar patios, along with planting an olive grove in keeping with the Mediterranean feel.

Other improvements included a new fire wall, six new fire pits and updates to pool areas, along with a new treatment menu at The Well Spa and the addition of Mediterranean-inspired menus at Citrus & Palm restaurant and The Tavern Bar.

“This transformation was designed to meet the needs of today’s leisure and business travelers while paying respect to Miramonte’s rich history, stunning location and the unique culture of the Coachella Valley,” said General Manager Ajit Acharya in announcing the completion of the renovation. “From our new spa menu and Mediterranean-inspired dining options to the reimagined spaces throughout the property, we’ve created a luxurious wellness escape and know guests will appreciate the attention to detail we put into this renovation.”

The project was led by Long Beach, California-based HFS Concepts 4.

Meeting space options include more than 35,000 square feet of indoor and outdoor space for up to 500 attendees, with five meeting venues: Mesquite Ballroom, Mesquite Lawn, the Juniper and Ocotillo Ballrooms, and the second story Miramonte Terrace, which boasts a grand stone fireplace and cathedral columns.

Described as a multimillion-dollar complete makeover, the renovation at the Renaissance Esmeralda Resort & Spa, Indian Wells led by SFA Design Company touched the resort’s 560 guest rooms and suites and corridors, and pool areas, along with the following new amenities:

Public area design highlights include an entry experience featuring dozens of pendant lights reminiscent of the desert’s night skies, a refreshed grand staircase and indoor fountain, communal dining and workspaces in the lobby and a reinvigorated The Place lobby bar that serves desert-inspired cocktails and a menu reflective of the early days of Indian Wells, the Golden Era of Hollywood and the days of the Rat Pack.

On the accommodations end, the renovation resulted in new guest room configurations that include a larger selection of suites and complete transformation in all room categories. New locally inspired room artwork evokes the surrounding neighborhood, scenery and history.

Groups can take advantage of a grounds renovation that follows a Mediterranean style, with gardens and a new olive grove, all of which can be booked for meetings, events and activities such as yoga and other wellness pursuits.

A major highlight set for a June 2022 unveiling is the Desert Glow Entertainment area, which will offer activities such as classic arcade games, duck bowling, an escape room and a bar slinging signature cocktails and light bites.

[Related: Why San Diego Should Be On Your Meetings Radar]

The two-year, $15 million project, which was completed at the end of 2021, has recast the property as a Coachella Valley entertainment hub with its The Backyard venue, which features live concerts. The renovation also included a full makeover of its 512 guest rooms and 130,000 square feet of meeting space to modernize the look and feel of the resort, which opened in 1987.

“Turning the page to the resort’s next chapter, and coming out of a global pandemic, the design and renovations have been centered around bringing people together, fun new experiences and the guest’s overall wellness, sending them home feeling better than when they arrived,” said Tom Scaramellino, general manager of the Westin Mission Hills Golf Resort & Spa, in announcing the completion of the renovation.

The Backyard features a stage, turfed terrace and outdoor kitchen with a woodburning oven, outdoor smoker and open-air barbecue, and carries a Moroccan design. The venue will also be used to showcase live culinary demonstrations.

Other aspects of the renovation include updates to the resort’s Las Brisas pool, spa, tennis courts, and the addition of 12 pickleball courts and a sand volleyball court, among other activity options, including a new four-lane bowling alley.

This youthful downtown Palm Springs hotel boasting a decidedly cool California vibe launched new F&B programming at The Kitchen and its popular pool, and completed a soft interior refresh. The property also came under the management of Columbia Hospitality.

Known for its pool and social scene, the hotel, which offers 25,000 square feet of meeting and event space, also added The Lounge at ZOSO, a Friday and Saturday night offering featuring local DJs. Other fun options for attendees who may want to extend their Palm Springs meeting trip include Flamingo Pool Parties on Saturday afternoons as well as the new Pretty Faces nightclub and a new drag queen brunch saucily named Biscuits and Bitches.

In addition to the major meetings property renovations, other new and improved news in the Greater Palm Springs area includes the following:

Read this next: Glamour, Celebrity and Movies Shine at the Palm Springs Film Festival