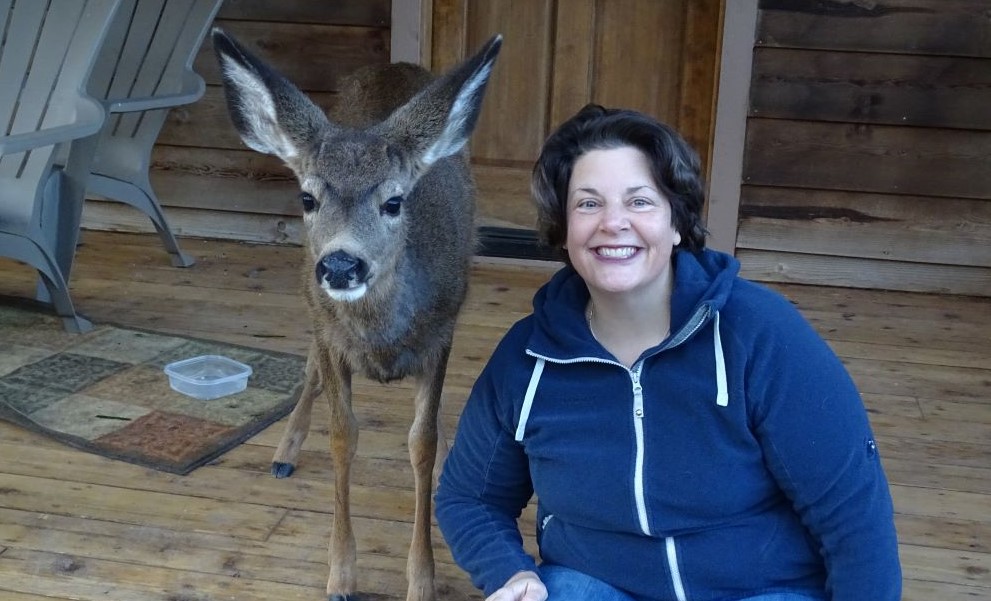 By now, many people cringe when the annoyingly ubiquitous buzzword “pivot” is used to describe a COVID-19 professional-life shift, but whether it was learning new technology such as virtual meetings, digging into unique meeting cancellation and postponement contract clauses or taking a job outside of one’s career while the world waits to reopen, it is apropos.

But not a lot of people can list “deer mom” on their pandemic-era resume.

Resume expert and meetings industry speaker Dawn Rasmussen, owner of Pathfinder Writing and Career Services can, as her pandemic lifestyle was radically changed by saving an abandoned newborn deer she named Thor and preparing him for a return to the wild outside her Oregon home.

“I never thought I would be a mama deer,” Rasmussen joked.

[Related: 20 Meetings Trendsetters Who Stepped Up When Their Industry Needed Them Most]

Her life has changed, at least temporarily, after her husband Brad heard cries of distress while walking in the backyard of their rural Oregon home in May 2020.

Brad tracked down the source of the plaintive little wails and discovered a tiny fawn, and then texted Dawn an image of it resting on his foot.

“He was like a day old, and fawns do not come out from hiding, so I knew something was amiss,” Rasmussen recalled. “So I immediately called someone I knew who was a biologist, and they said he was probably dehydrated, so I gave him some Pedialyte and left him for a couple hours to wait for his mom, who never came, so we knew he was truly abandoned.”

As the fawn’s biological mama deer never returned, its chances of survival would be next to nil if he was released in an unfamiliar area without a deer family to take care of him. So it was clear what happened next: The fawn was now a new charge. And a hungry one, at that.

“I was warming up goat milk every three hours,” Rasmussen remembered. “He was in my office for the first week, and then in the second week, he was running free during the day and sleeping in an enclosure in the yard at night. I actually put a tent up there and joined him, because we’ve got cougars and bobcats nearby. I didn’t want to give them a free meal.”

The Care and Feeding of a Fawn

In the age of social media, of course, the first thing one needs to do after stabilizing a young fawn is to share the experience with one’s network, and poll them for a name. “Thor” it was.

After nursing Thor back to health via goat milk, and then powdered formula (which was much less expensive), Rasmussen next started introducing deer foods such as acorns, lichens and grass into Thor’s diet. By this time, little Thor was attached—and demanding feedings every two or three hours that kept Rasmussen bound to her property—but she knew that this bonding was essential for Thor’s survival in the short term.

The ultimate goal would be to introduce him to his extended family and after a year during which male fawns are cared by for their mother, send him off to a “bachelor herd.”

“He’s not a pet; he’s a wild animal. So the goal is to get him in that bachelor herd, and he’s already there,” Rasmussen said about 9 months into the process when she talked to me about the experience and Thor’s daily visits grew shorter as he started to hang with his deer bros.

Nature can be cruel, of course, so Rasmussen has never looked at the situation through rose-colored glasses.

“That’s part of the deal—Thor got the deluxe parent package here, but other than that, I can’t do anything more than I’ve done. That was my role,” she said. “The reality is, if he survives predators, he will probably be shot by a hunter in three or four years. But he was going to die as a fawn, so giving him that extra step was all I can do. At night I hear the coyotes, but that’s life. That’s nature.”

Besides the tender joys of deer motherhood, Thor also provided more than a bit of whimsy when he would find a way to Zoom bomb conferences through the window—take that, all of you who think your little dogs or cats are the ultimate cuteness overload to break videoconferencing monotony.

“I have to warn everyone, if you hear any belching noises during our Zoom conference, it’s not me, it’s the deer, because they do burp,” Rasmussen laughed.

Another rapid pivot came when the area around the Rasmussen’s home was threatened by severe wildfires, which forced the family to coax Thor into their Subaru Outback for brief evacuations on two occasions.

At the time of this writing, Thor was well on his way to independence, traveling first with his extended family (most likely led by an aunt) and then a bachelor herd. But along the way, Rasmussen has documented their common journey via a Facebook page, Twitter and Instagram feeds and soon a children’s book titled Mighty Little Thor: A Fawn Lost Then Found and illustrated by a local artist.

Thor’s internet celebrity has since brought people from all over the world into the herd, who are inspired by the light in their shared journey during the dark days of the pandemic.

“I had no idea that when I started writing about Thor on Facebook that it would be such a beacon of light for so many people, and that so many people would find this to be a ray of hope,” she said.

Ever industrious, Rasmussen added a The Thor Store section to the Thor the Deer website, with 100% of the proceeds from the locally produced glass ornaments, painting kits, wool-felted fawn sculptures and t-shirts going directly to each artist.

She also includes a “How to Help a Wild Animal” section on the site, with key tips to help ensure the safety of both the animal and the rescuer, gleaned from wildlife rehabilitation experts and Rasmussen’s previous experience of rescuing wild animals.

Life Lessons From Thor the Deer

We’ve all been forced to learn a lot about ourselves and others during the COVID-19 pandemic, and Rasmussen feels she’s been blessed by her experience and what she learned.

“If you are willing, nature has a lot to teach us,” Rasmussen said. “And just being quiet and observing, I’ve learned a lot about deer and deer behavior. We don’t dominate nature; we have to be a part of it. And it’s also been humbling to be in a place where I’m trying to help a creature—it’s so unexpected.

“It’s not been a burden, it’s been a wonderful experience seeing this whole thing unfold,” Rasmussen summed up. “And it’s still unfolding—that’s the cool part.”

And being an ace meetings industry resume writer, Rasmussen now has a new title that describes her most recent “work” experience.

How to Find Thor on Social Media