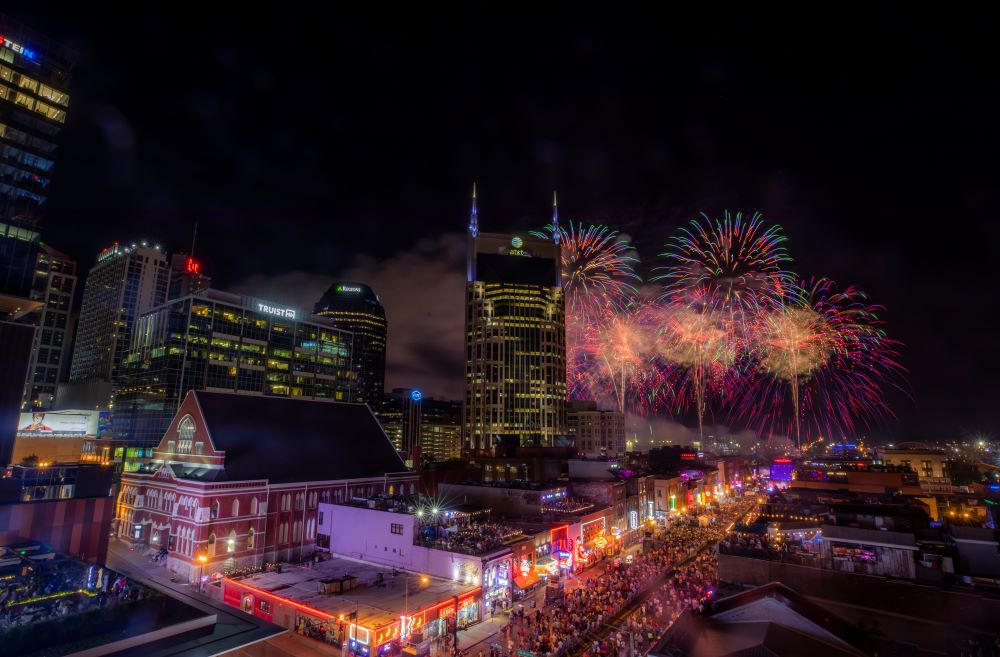 Nashville’s hospitality and tourism industry is on a tear.

According to hospitality data and analytics company STR, Nashville trailed only New York in leading the top 25 U.S. markets for hotel development in the last year. The pandemic didn’t even slow Music City down, with Nashville’s Davidson County adding some 4,811 hotel rooms in the last two years, also according to STR.
All the new rooms—in a variety of chain scales—has given a destination that has never lacked for entertainment and excitement options the rooms and price point range that opens it up to a larger number of groups.

“I call it an evolution with both the volume of rooms and the distinct variety, from boutique to five-star,” said Butch Spyridon, CEO of the Nashville Convention & Visitors Corp. “It’s filled every hole that we had, and we feel like we’re in a great position. We have the opportunity to capture just about anything we would like to go after and book. Hotel room numbers or quality is no longer a question or an issue.”

The top end of the market, especially, is creating new opportunities for Nashville meetings.

“We’re also about to break ground on a Ritz-Carlton,” he continued. “It was always a void in our offering, and I think one of the other things this development does is it will even out the tiered-rate structure. We’ve been fairly expensive and now we have more product to match the high-end product. Demand was driving rate maybe more so in the higher-end product, so now there’s a balance in place.”

The following hotels have recently opened, or have estimated opening dates in place:

About 30 miles south of Nashville, in the rolling foothills outside of Franklin, Southhall Farm & Inn sits on 325 acres and is anticipating a fall 2022 opening. The “farm-centric” venue will be well-suited for retreats and small meetings where a lack of outside distractions is key.

Southall offers 62 guest rooms and suites and 16 separate cottages, with an emphasis on wellness, outdoor education and adventure activities.

Meetings Today will hold its Meetings Today LIVE! hosted buyer program in Nashville July 9-12, 2023, at the Omni Nashville Hotel. For more information, or to submit an application, go to www.MeetingsToday.com/events.

The Omni, which is connected to the Country Music Hall of Fame & Museum, is the largest hotel in downtown Nashville, with the most rooms (854); most meeting space (80,000 square feet); most suites (54); and the largest ballroom (25,000 square feet).

“The only thing outpacing new hotels is new restaurants,” Spyridon said. “Both the quality and diversity have just exceeded everybody’s expectations. I used to be able to say, ‘I’ve eaten at every good restaurant in the city,’ and I can’t keep up anymore—from high-end seafood to celebrity chefs and Italian.
“It’s just hard to keep up with what has transpired,” Spyridon, who has helmed the bureau for more than 30 years, added, “and even our casual, Arnold’s [Country Kitchen], has opened at night with a higher-level experience, with a 1950s-style soda shop and liquor license and live music, so there’s kind of a blending on both sides.”

According to the Nashville Convention & Visitors Corp., Music City has added nearly 200 new food retail options in the last two years, with 40 more expected to be added by the end of 2022. Although the city’s signature treat, Nashville Hot Chicken, is riding a popularity wave nationally, and restaurants serving the area’s traditional Southern entree, “meat and three” (meat served with three vegetable/side options) are always on tap, Nashville has benefitted from a variety of new chef-driven concepts.

One food scene mover and shaker is Sean Brock, who opened Audrey in 2021 and the exclusive 23-seat restaurant June this July. Brock also opened The Continental, an upscale, classic American restaurant in the new Grand Hyatt in 2021. Other chef-driven new entrants include venues from Tandy Wilson (City House); RJ Cooper (Acqua and Saint Stephen); and Michelin-starred chef Tony Mantuano (Yolan, located in The Joseph, a Luxury Collection Hotel, Nashville).

Also new, or relatively new, on the cuisine scene are the following hip and happening restaurants, nightspots and cocktail bars:

“The Music City Center development really jump-started the explosion on the culinary side—there’s a direct correlation leading to an embarrassment of riches to a degree,” Spyridon said about the city’s exploding dining scene sparked by the 2013 opening of the convention complex. “There’s a lot of new. The hospitality and the authenticity of the city are still front and center, though. As we’ve evolved, we’ve kept our feet planted in the ground and stayed true to our roots. Music is still the calling card, and Southern hospitality is still job one.”

PowerXchange shares time and space with The TechAdvantage Experience & Expo, an annual 8,500-person event. PowerXchange is the largest gathering of electric cooperative leaders, designed to embrace the challenges of our ever-changing industry and cultivate future-focused thinkers. TechAdvantage Experience is the premier event for electric cooperative engineering, operations, information technology, purchasing and supply management professionals. This is a three-day event of leading-edge strategies and best practices created to share and demonstrate advantages in science, technology and other industry areas.

Why did you decide to host the meeting in Nashville?

Nashville is a central location to over 60% of membership. Our members can drive to Nashville is less than a day’s drive.

What surprised you the most about Nashville?

The popularity and growth with Nashville is amazing. The range of activities, restaurants and hotel selections has made a positive shift for our organization.

Our attendees really enjoy the walkability of the downtown region. There’s a large variety of entertainment, and the down-home, accommodating feelings from the city.

Is there anything you wish you had known beforehand?

I wish I had known how awesome the 5th + Broadway project turned out.

Did you utilize Nashville’s music scene for any events?
We hosted an exciting reception at the FGL (Florida Georgia Line). Huge success!

What were some of the unique offsite venues that you used?

We did not use an offsite venue, but I want to express how great the Karl F. Dean Grand Ballroom is. NRECA regularly hosts an Entertainment Night during the event. This year we had 38 Special. The Grand Ballroom is truly an acoustically sound space; the concert was amazing.

What local suppliers did you utilize?

Do you have any advice for other planners who might bring a meeting to Nashville?

Nashville is a great city to host your next event. NRECA hosts several events with various properties and times. Contact the Music City CVB; they are a great resource and advocate to ensure your event is a success. The only reason your event won’t succeed in Nashville is you didn’t try booking your event here.

AISTech is North America’s largest annual iron and steel technology conference and exposition. It provides a global perspective on today’s marketplace by featuring technologies from all over the world that help steelmakers to compete more effectively. Steel’s Premier Technology Event welcomes over 8,000 industry professionals from more than 40 countries, an audience representative of steel producers, suppliers, academia and students. No matter if you’re new to the trade, just starting your career or an industry vet, there’s something for everyone at AISTech.

Why did you decide to host the meeting in Nashville?

We held this annual in 2017 and our attendees loved it. Since we canceled our 2020 conference, most of our attendees were eager to get back in person. We did have to delay our 2021 show from our normal dates (eight weeks), but that timing helped us tremendously with the COVID rules and regulations in the city. We were the first tradeshow in Nashville during the pandemic, following the Southern Baptists a week before us.

What surprised you the most about Nashville?

Nothing really since we had been there before, but if you talk “pandemic,” we were surprised there were so many people in the city.

The nightlife and walkability of the city.

Did you utilize Nashville’s music scene for any events?

We held one private event at the Ryman Auditorium. It was fabulous, but there’s no room for large events or sit-down meals, so you should make other plans for food. Songwriter City arranged for singer/songwriters to perform and tell their stories, and people loved that. Other companies had private events at different venues around the city, also.

What local suppliers did you utilize?

Do you have any advice for other planners who might bring a meeting to Nashville?

Nashville is a great city for groups. The walkability of the city is excellent—no hotel seems too far away. The meeting space at the convention center is laid out well and easily navigable. The food is excellent at the convention center and all the staff is easy to work with. The nightlife is none that any city has seen before, especially with all the outdoor space accessible. With the choice of music and entertainment, there is something for everyone.