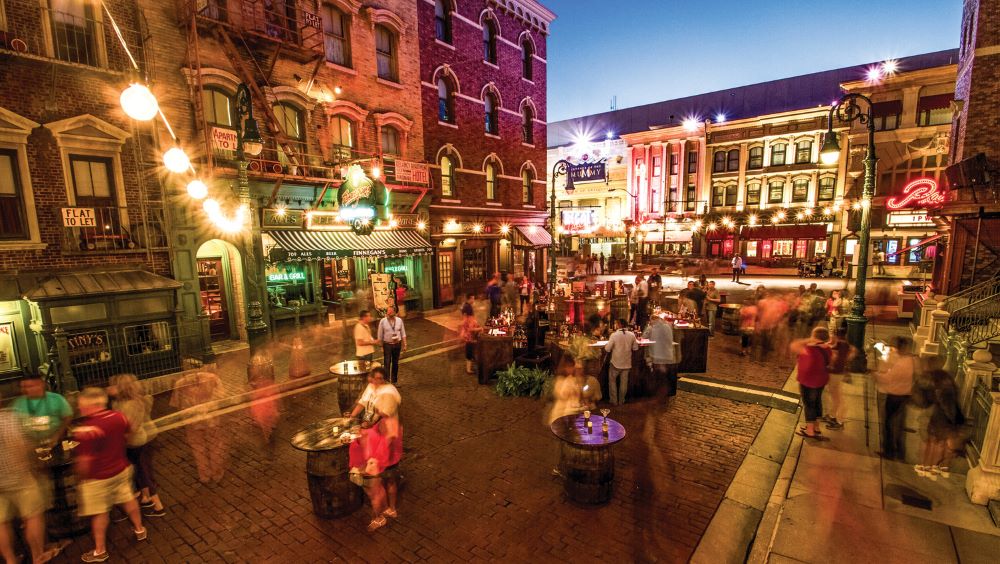 Theme parks have long been tourist draws. Their sense of wonder and imaginative environments captivate guests—of all ages—and provide a thrilling escape from everyday life.

While attendees may jump at a chance to attend a meeting or convention in Orlando or Anaheim, California, due to the scores of A-list theme parks in those destinations, perhaps with hopes of blocking some time before or after the business trip to indulge in some onsite fun, planners can really surprise and delight their attendees by hosting a special event inside the parks.

With built-in decor, onsite event and catering teams, and immersive activations you can’t experience anywhere else, the following theme parks are guaranteed to make your attendees feel like VIPs and kids again, all at once.

Home to 295,000 square feet of meeting space and 9,000 hotel guest rooms across eight hotels, three theme parks and the CityWalk dining and entertainment complex, immersive events are just a walk in the park at Universal Orlando Resort. Planners can work with Universal Orlando’s team to even combine venues to accommodate events from 600 to 4,000 attendees.

One of the best illustrations of Universal Orlando’s creativity is a private event inside the parks. Recently, more than 4,000 IPW (U.S. Travel Association’s international inbound tradeshow) attendees enjoyed a park-wide closing night event at Universal’s Islands of Adventure where they had the entire park to themselves and a chance to experience unlimited access to rides and attractions throughout the park’s seven themed lands: The Wizarding World of Harry Potter–Hogsmeade, Marvel Super Hero Island, Toon Lagoon, Jurassic Park, The Lost Continent, Seuss Landing and Port of Entry.

“Universal Orlando’s event planners went above and beyond to create unique and immersive experiences for the attendees,” said Eric Marshall, SVP destination sales for Universal Parks and Resort. “The event started with a red carpet arrival at the entrance of Universal's Islands of Adventure, where guests were greeted by Universal Team Members, a cast of characters that you can only find at Universal Orlando Resort, music, lights and welcome signage in several languages.”

Marshall added that the park provided entertainment in the form of performances from the Hogwarts Frog Choir in The Wizarding World of Harry Potter, character meet-and-greets, and multiple DJs. Food and beverage options were also themed, with catering inspired by global cuisines, such as Greek and Moroccan cuisine in the Lost Continent, butterbeer in The Wizarding World of Harry Potter, modern fare at Marvel Superhero Island and more. Photo opportunities and giveaways were in abundance throughout the event.

According to Marshall, the overall reaction from the international group of attendees was nothing short of impressed, and the park closure for the group gave it the air of a VIP experience.

“We received excellent feedback from attendees and IPW event planners,” he said. “From beginning to end, attendees were amazed by all the details and experiences that our team was able to create for this important international and domestic trade audience. The welcoming moment was one of the highlights of the night. We keep hearing how guests described this as a one-of-a-kind experience.”

[Related: Minions, Meetings and Harry Potter: Why You Should Book Your Next Event at Universal Orlando]

One mile from Orange County Convention Center (OCCC) and in close proximity to many of Orlando’s convention hotels, SeaWorld Orlando is a convenient option for special offsite events. Whether you’re planning a networking session or meal event, attendees will enjoy much of SeaWorld’s open-air venues, rollercoaster rides and opportunities to interact with animals.

SeaWorld is a fully accredited zoological institution and has helped rescue over 40,000 animals, including rehabilitating many and releasing them back into their natural habitats. Events at the park help contribute to this mission, and attendees can learn about the various animals SeaWorld helps rescue, along with getting up-close-and-personal with a few of the park’s residents.

A few of the spaces that can provide immersive environments for meetings and events include:

With flexible meeting and event space spanning over 180,000 square feet, nearby hotels, two theme parks and the Downtown Disney District, Disneyland Resort, meeting and convention powerhouse Anaheim has much to offer special offsite events—much of it within walking distance.

Recent luxury hotel upgrades to the destination nearby Disneyland Resort and the Anaheim Convention Center, JW Marriott, Anaheim Resort and Westin Anaheim Resort, add to the lodging options in town. Once settled at their hotels, groups can attend an awards ceremony, teambuilding activity, special dinner events and more at Disneyland Park or Disney California Adventure Park.

Examples of impressive and immersive backdrops for events include:

Planners can also work with Disneyland Resort for special evening tickets for convention and meeting attendees, in addition to buyout areas for large groups. For after-meetings meals and entertainment, attendees can also venture to Downtown Disney District for restaurants, entertainment, shopping and a nice view of the famous Disneyland fireworks.

Off the heels of its 50th anniversary in 2021, Walt Disney World Resort is more magical than ever, with the new Star Wars: Galaxy’s Edge land captivating Star Wars fans and recent partnerships with National Geographic providing meeting planners with a new host of motivational speakers from around the world.

Some notable locations include: